Every year, thousands of awards events are held. Just think about the movie industry: There are the Academy Awards, Golden Globe Awards, Image Awards, MTV movie awards, People’s Choice Awards, SAG Awards, and more. And that’s just those held in the United States! There are hundreds more held in other countries too. Of course, there are also awards in other industries as well as elections and competition surveys. So how can you make an award survey that engages participants when there are so many events being held? By using picture questions for your online survey awards.

Why Create an Online Award Survey with Picture Questions?

An awards form is necessary in order to present participants with nominees and/or candidates in particular categories. Juries consisting of professionals in the award category are often choosing the winner(s) of the awards. But often it’s the “people” who get to choose the winner.

That’s why creating an accessible form, survey, or poll for these types of competitions with awards is a must these days. It allows the award organizer to perform global research, asking fans from all over the world for their opinion on who will be the movie actor or musician of the year, and so on. This makes the voting process democratic and fair to the contestants, but also to their fans across the globe.

Choosing the song of the year, movie of the year, newcomer of the year, the act of the year, and more has never been easier with online surveys that allow people to vote using picture questions. To make awards online, creating them is as easy as 1,2,3:

Competitions, both local and global, happen all the time, regardless of the size of the event and the fanfare. Being a winner means you have done something great and worked hard for it. That’s why we feel the process for choosing a winner should be as fair as possible. Using an online form to collect votes saves you time and makes it easy for people to vote, leading to more votes collected and as a result, a more fair decision is made.

While the 2022 Oscars may have made the most news due to “the slap heard around the world,” there were still plenty of Oscar ballots created for Academy voters and the average movie-goer in order to predict a winner. However, most looked something like this: 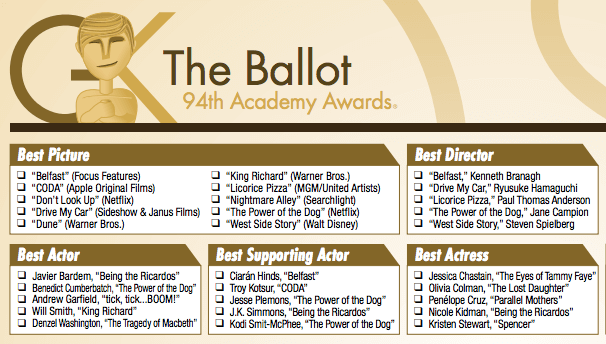 Now, consider this online survey that would allow people to vote on pictures, including a nice red curtain background and Oscars statuettes at the top for visual appeal. With this picture poll, the imagery helps trigger memories and emotions voters may have had about the films in question. This Oscars ballot form provides more engagement, which leads to a more fair outcome. 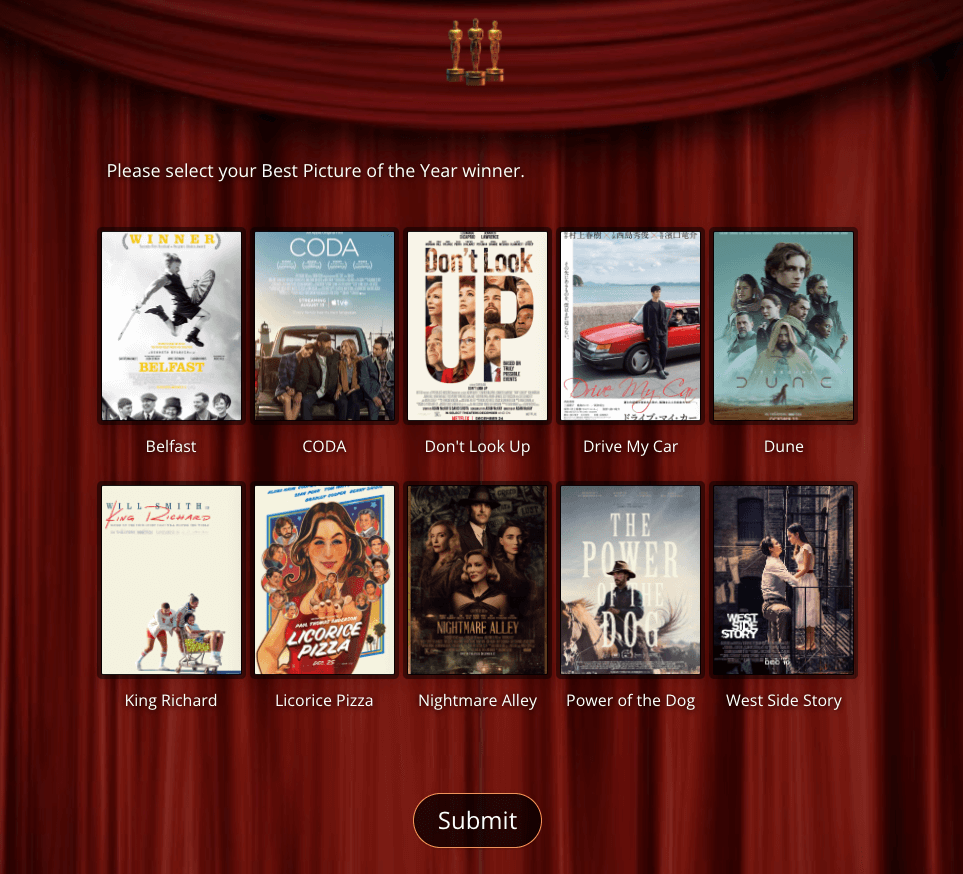 Not all online surveys and picture polls highlight the winner of a major event. You can also conduct some for fun, which media outlets often do to engage with their readers. For example, superhero movies are extremely popular. Check out this survey that lets people vote for their favorite superhero using picture questions. 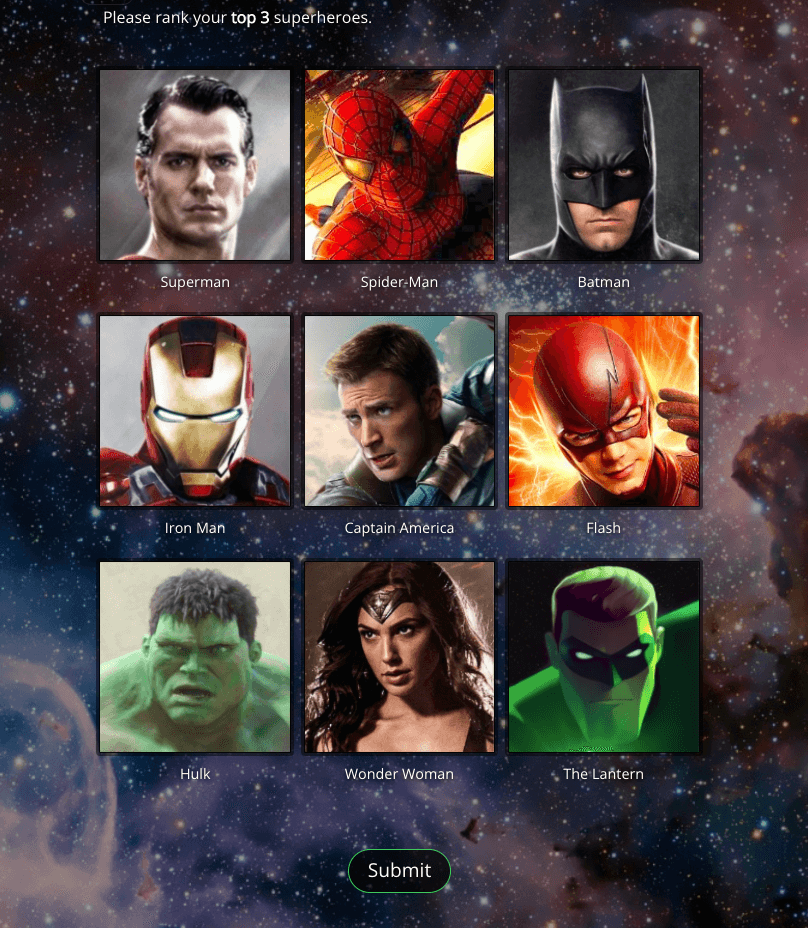 Election Ballot or Poll with Pictures

Who will be your next president, governor, mayor, or senator? That’s a great question and you can get more accurate answers by allowing participants to vote on pictures. As with all important picture questions, it’s important to use a system that treats each candidate fairly (e.g., alphabetizing answers, using similarly sized and high-quality images, etc.) to avoid sampling bias. 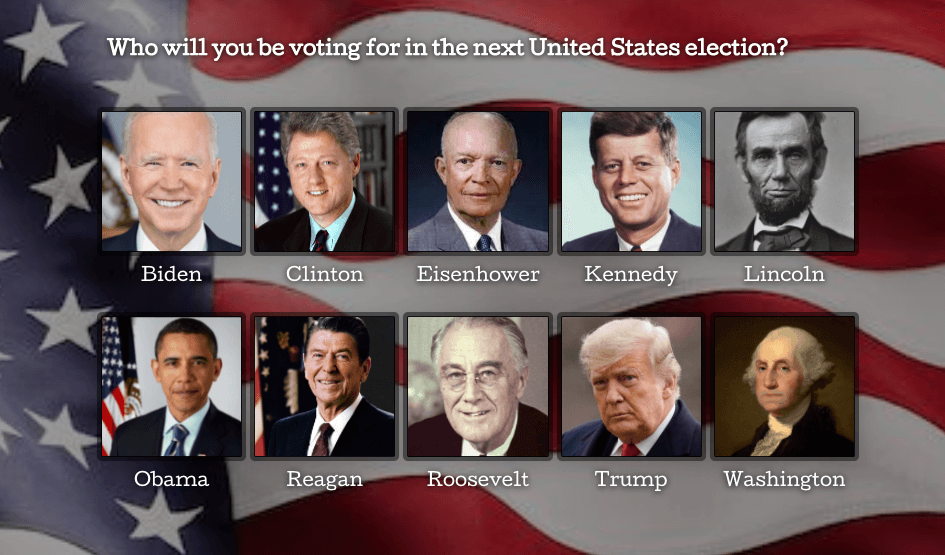 Today, there are thousands of industries, companies, and other entities creating award surveys with picture questions. Check out the MENA Content Creator Awards, for example. MENA (an acronym for the Middle East & North Africa) celebrates the region’s top-quality content creators and talents together with leading global and regional brands in the industry. Participants can cast their vote on everything from Social Media Kings and Queens to category awards, such as Lifestyle Trendsetter, Food Vlogger, Motor Head, Tech Guru, Fitness Fanatic, Parent Ambassador, and World Adventurer. Here’s a look at one of their categories: 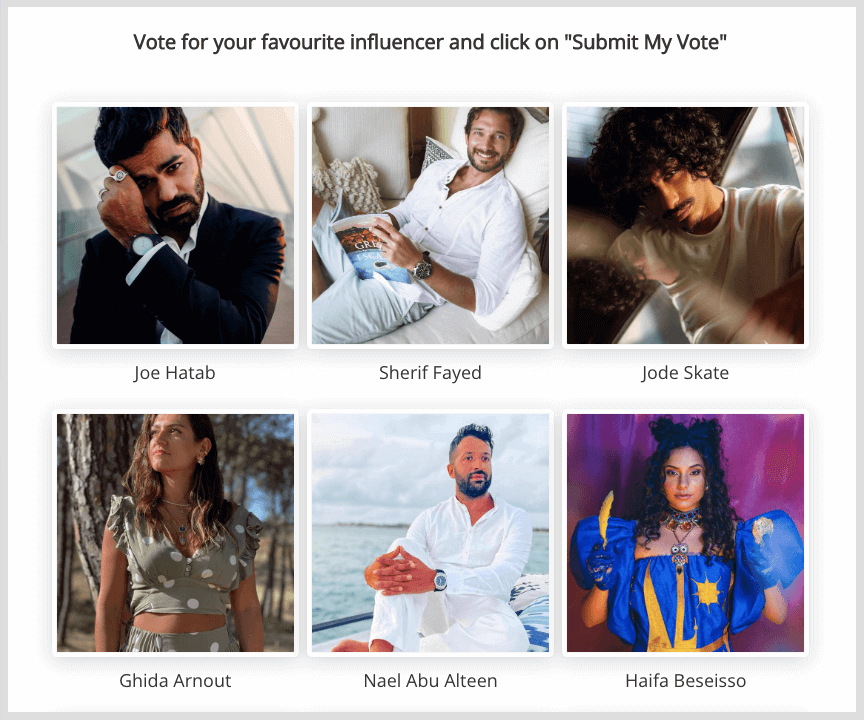 Look familiar? That’s because the MENA online survey awards use SurveyLegend’s powerful tool to ask questions with pictures, embedded right on their website. You can too!

Ready to create engaging surveys with pictures that get results? Whether it’s for an award ceremony, an online contest, or a local or national election, creating an online poll with SurveyLegend. It’s free to start and easy to use, allowing you to easily create questionnaire pictures, survey pictures, or poll pictures. Once you’ve allowed participants to vote on pictures, we’re sure you’ll never go back to text-only surveys.

Have you used a survey with pictures in the past? Do you see the benefits of picture questions? Let us know in the comments!

What are the benefits of surveys that use picture questions?

Which types of awards can benefit from using surveys with pictures?

All awards can benefit from using surveys with pictures. Highlighting movies, musical artists, content creators, fashions, and more with visuals is always a more engaging experience. 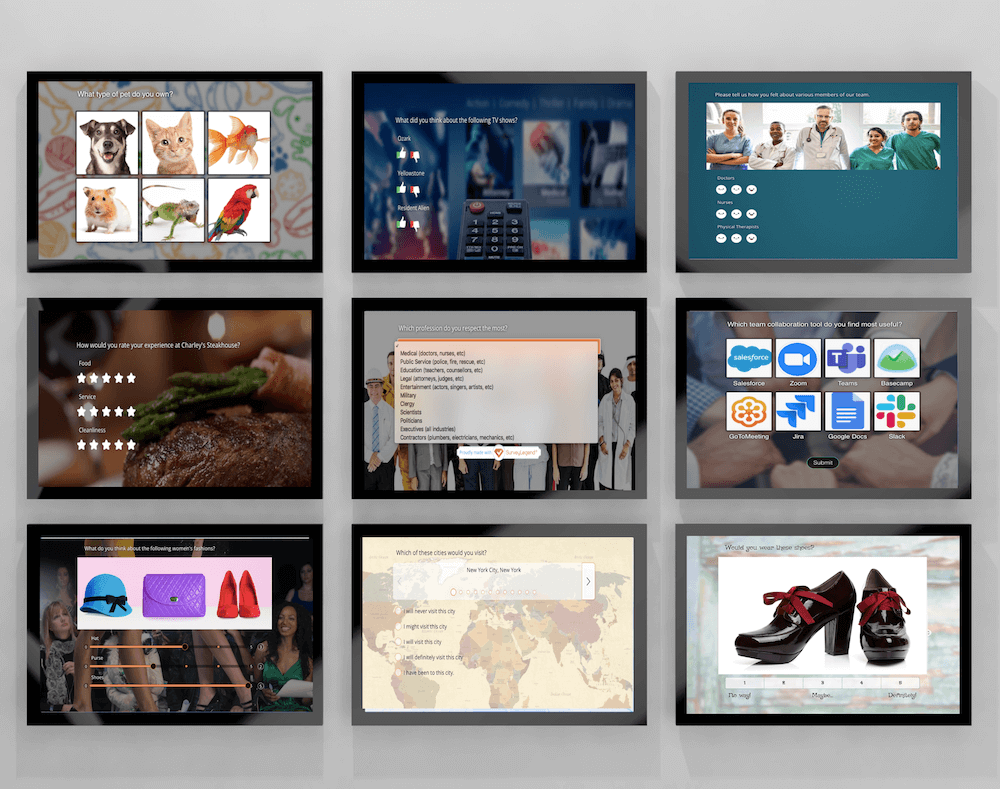 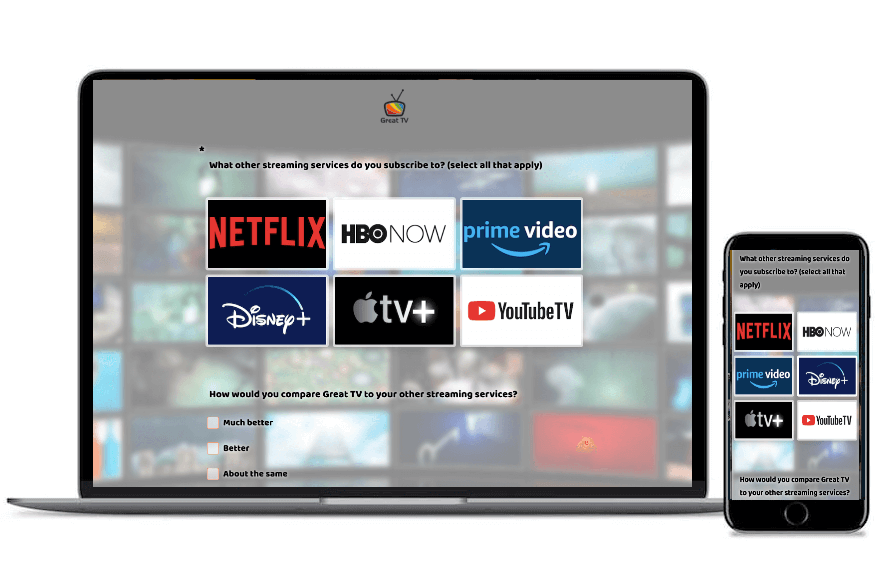 How to Conduct Fashion Surveys with Images

What never goes out of style? Fashion surveys! And while nearly 70% of Americans believe people are too focused on fashion, according to a Reuters fashion poll, the majority...